It seems I've caught the sewing bug and over the past few weeks I've been stitching and have happily cut into some of my vintage sheets.

I made a couple of wrap skirts for two beautiful women. Unknown to each other but both are kind, funny  and thoughtful. I loved sewing every stitch.  Making something is so much more enjoyable when it is for someone else, I think. 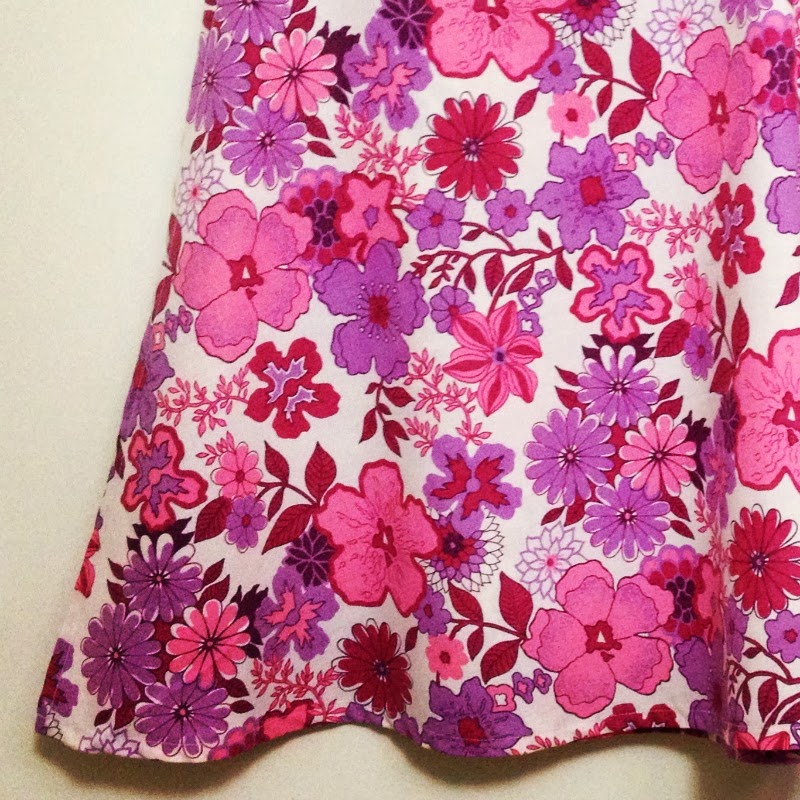 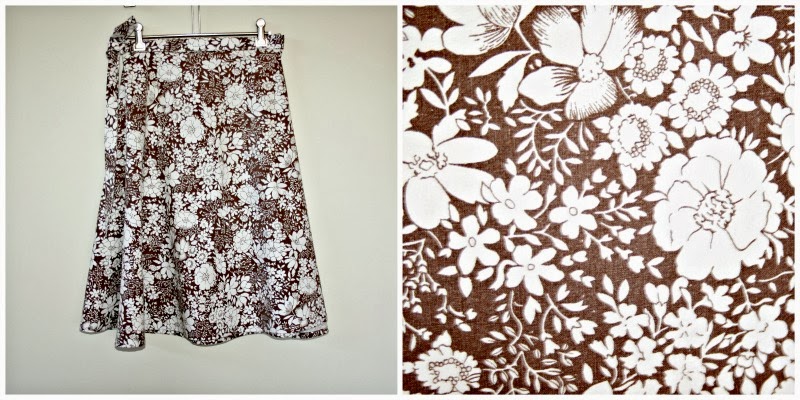 I also stitched a pillowcase dress for my littlest love. It was one of those things I have been meaning to make since forever. 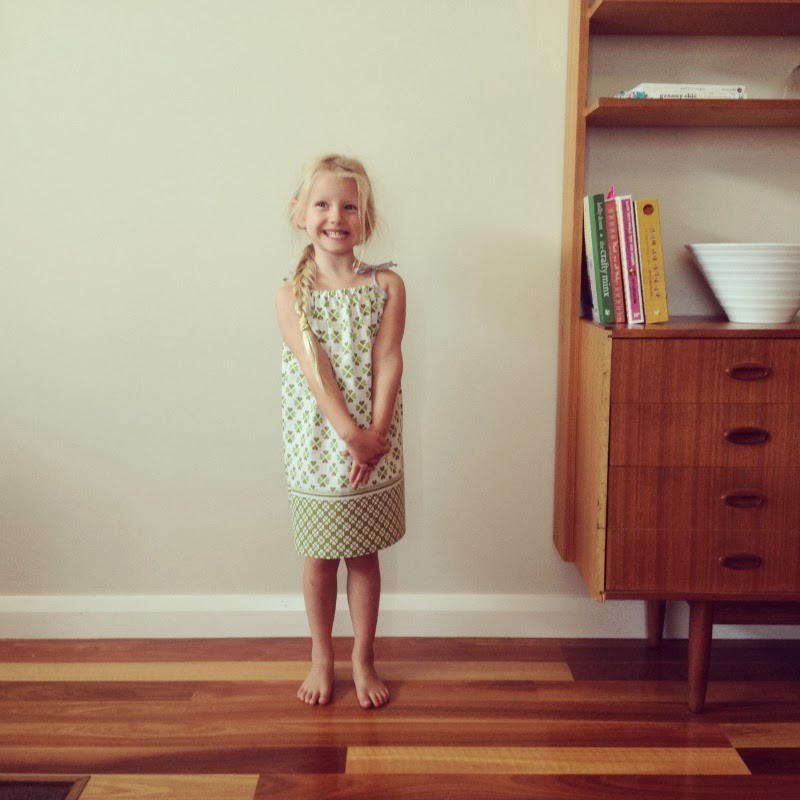 My big girl liked it and so I turned another thrifted pillowcase on it's side and made her a little top. She prefers converse boots and cut off jeans to mama made clothes but this one was a winner so I am pleased. 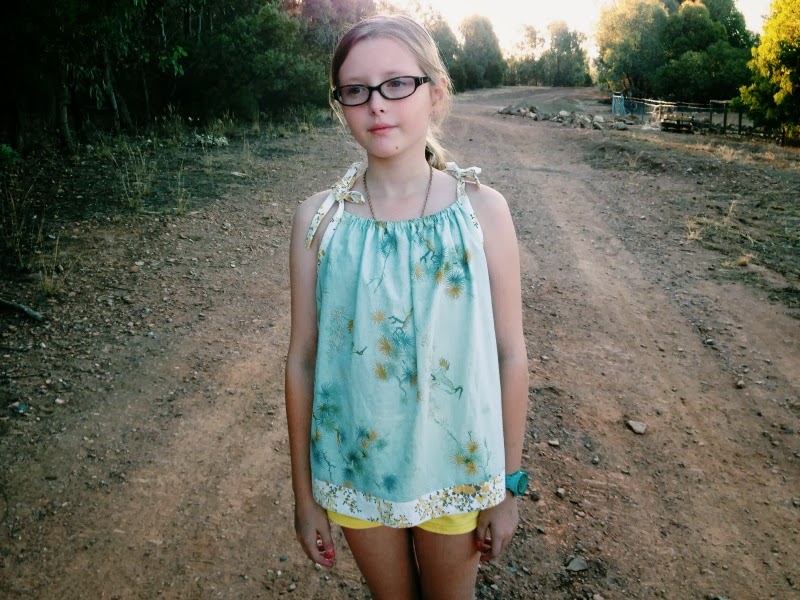 And last but not least, I salvaged this piece from my wip's box. I tried to make a skirt a long time ago but I cut the band all wrong and it didn't fit so it was tossed aside for another day. I attached the skirt to a singlet that I picked up at Cotton On so I guess I cheated a bit with this one but at least it's out of the wips box and in my cupboard. I feel like a big dork in these photos too but I am okay with that. Actually, I am hoping the thrifted macrame belt steals your attention away from the big dork!

Right then! I am off to make a cuppa and breathe. This silly post took me SO long. First I lost all my words and then I lost some of the pictures. And I almost lost my nerve!
Posted by Lea at 9:48 PM 4 comments:

A new purse. Much needed, $10 from a second hand store. 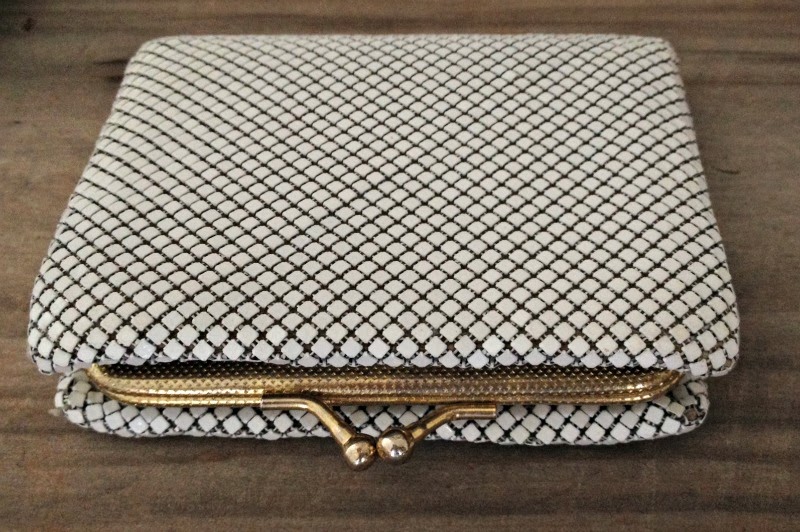 A new rose tapestry, $1.00 from the oppy. Gosh I totally wish the maker knew how much I love it and appreciate their work. 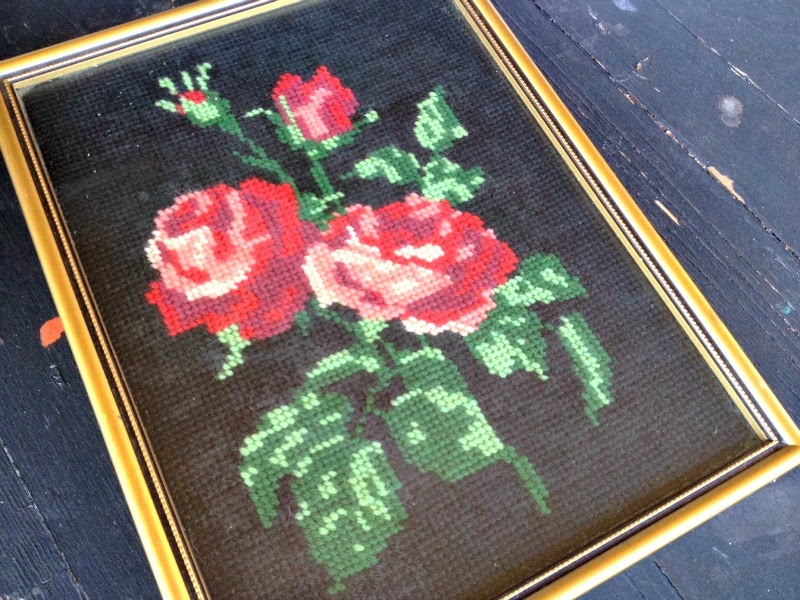 And these pieces of perfection were a total splurge at $50.00 for the pair! 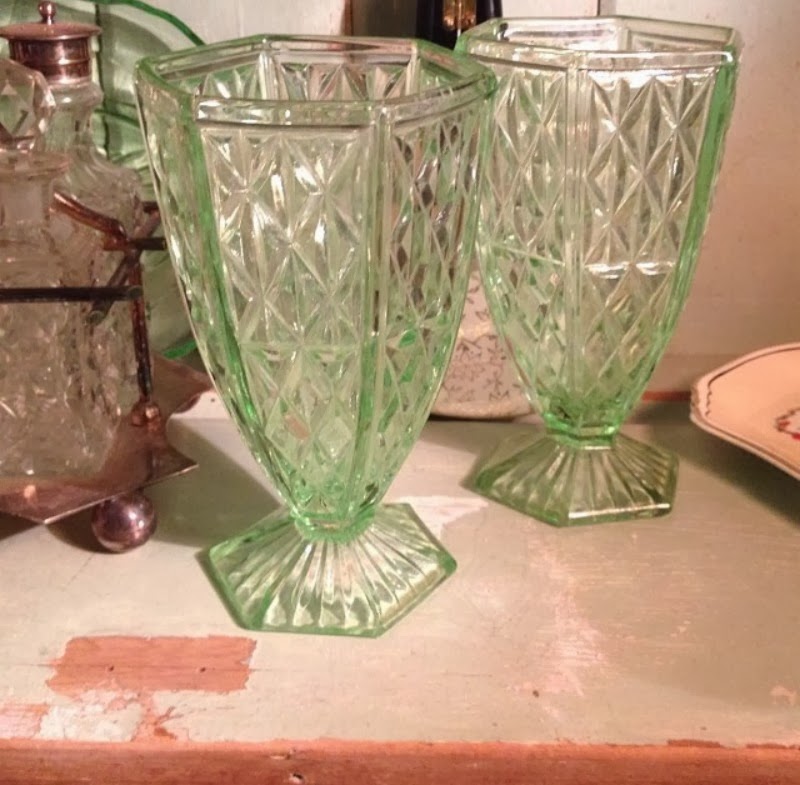 My depression glass collection is only small because I am never prepared to pay the prices but these were a must have. I totally blame Kylie for this puchase because she sent me this gorgeous painting and well..you can see where this is heading. 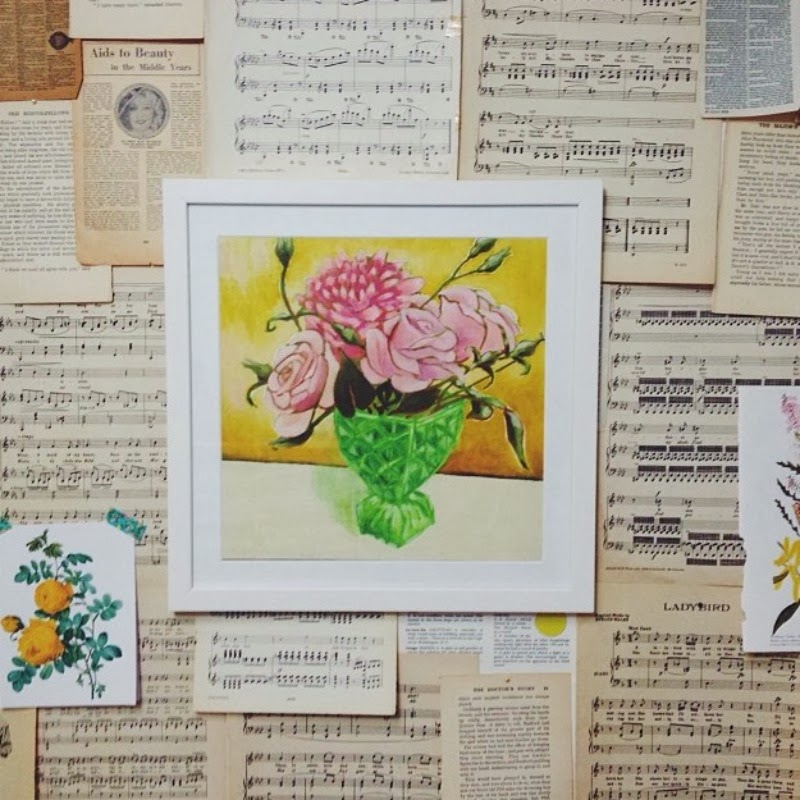 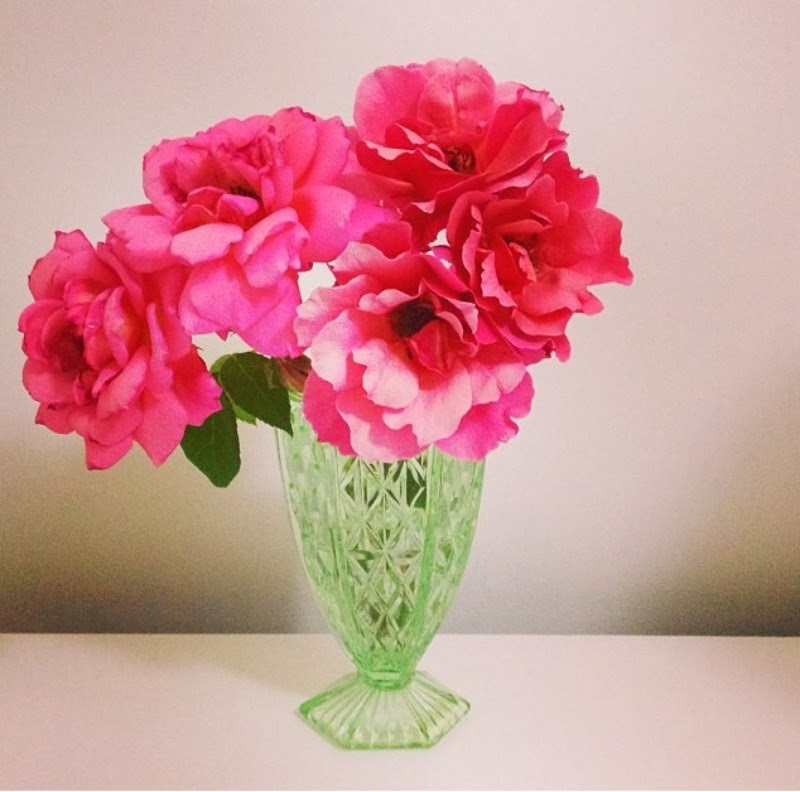 Life imitating art? I think so!
Linking in with Max and the other show offy types.
Posted by Lea at 11:35 PM 6 comments:

Today I have done five loads of washing. The back from holidays wash!
Today we had breakie at 10.30am
Today we are sorting through pencils and textas, sharpening the ones that are blunt and tossing the ones that don't work.
Today I am in pjs at lunchtime. If I'm honest, that's not unheard of around here.
Today I am sorting out the tupperware draw. Is yours a crazy mess too?
Today the kids are getting ready for school. They are excited about new lunchboxes, new friends and old and new teachers.

I'll leave you with some snaps from our long weekend. It was a nice end to our school holidays. A change of scenery, salty air and cool breeze. My gang were starting to squabble and it was driving me a bit mad. They are ready for new adventures and a bit of routine. And I think I might be too. 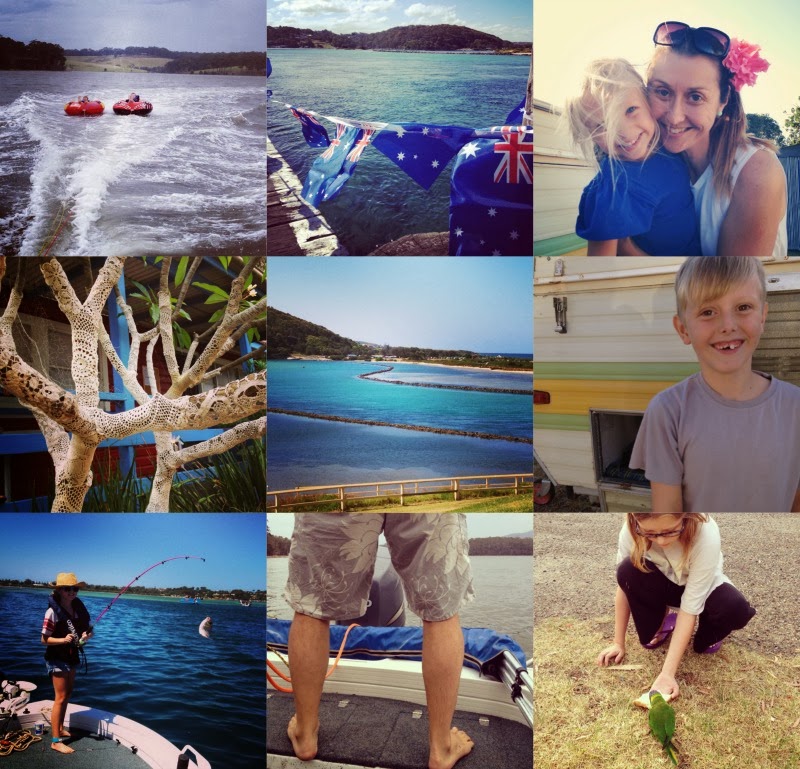 Lately, there has been a lot of eating and drinking, laughing and talking and late, late nights.
Not this week though.
This week the littlest love picked a basket of her home grown tomatoes. 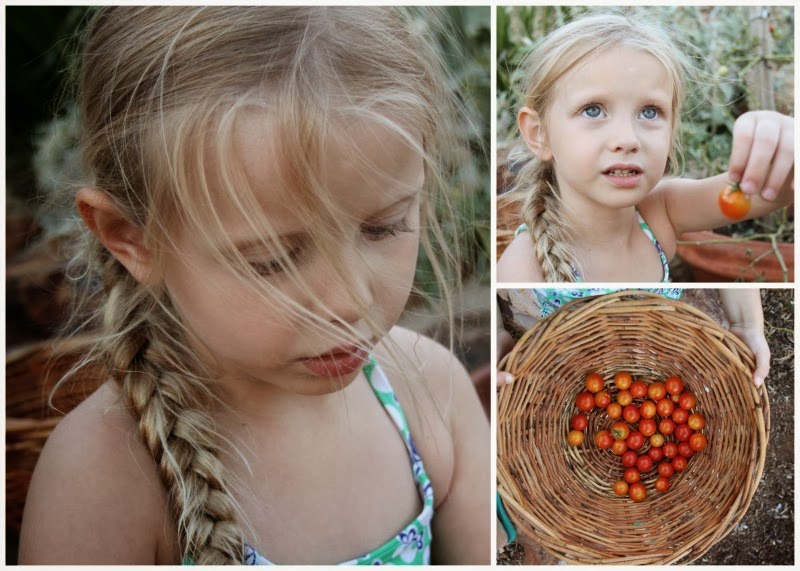 This week I have been thinking of my one little word and have been taking time to nourish myself with breakfast. Sometimes, I begin my day with nothing more than a quick coffee and a breath of fresh air. Not this week though. I've been taking the time to make myself something good. 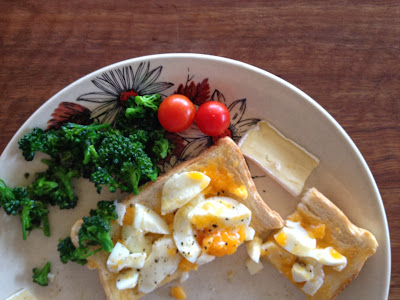 This week we had a break from screens. There were cubbies built, board games played and books read. 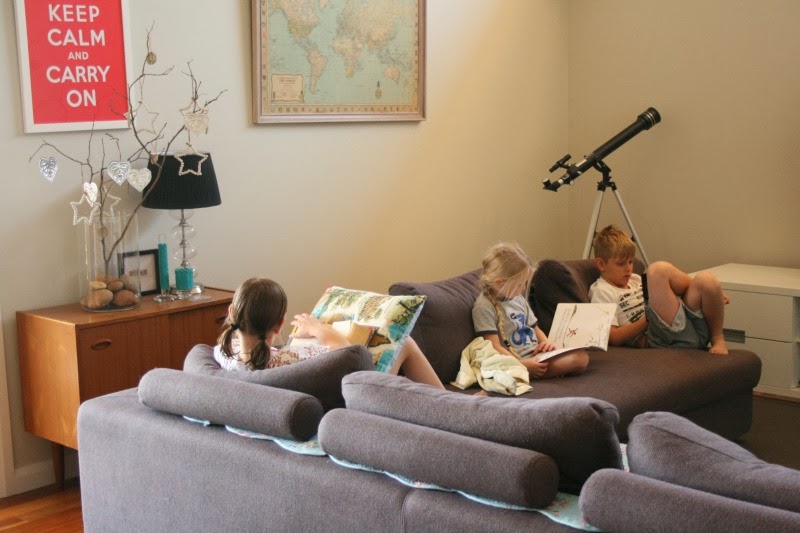 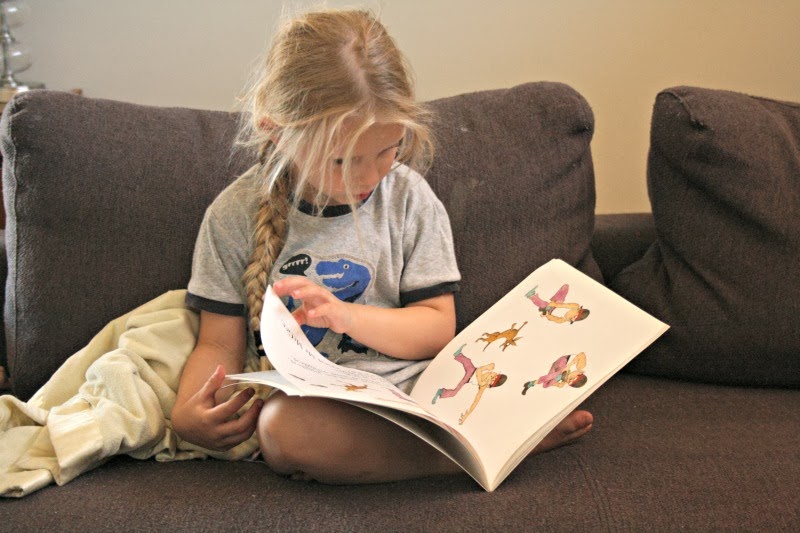 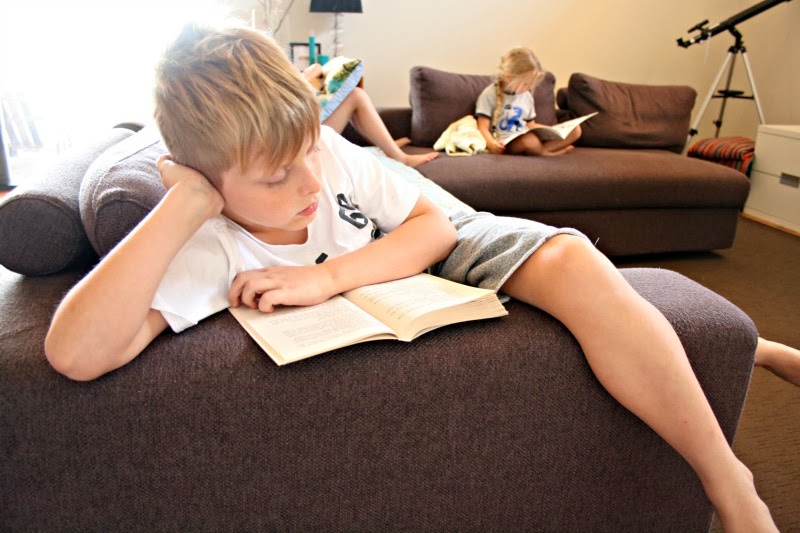 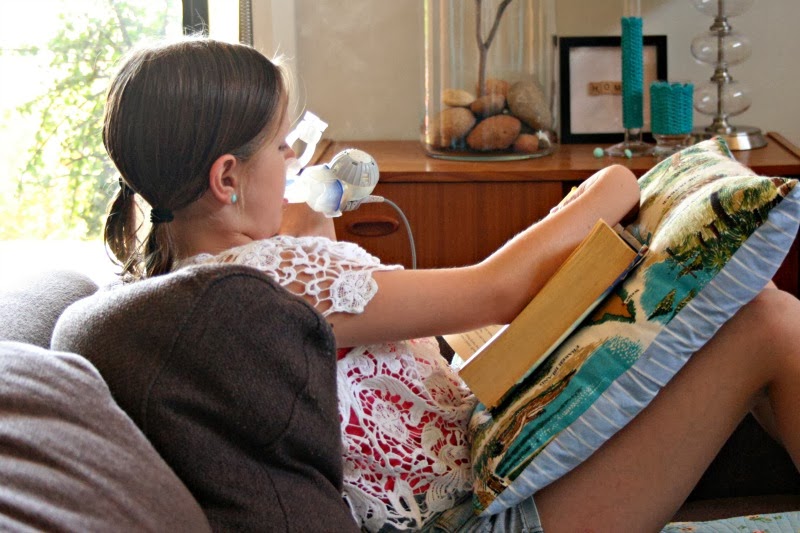 This week has been slow moving..just the way I like it. I have been taking time to sit outside and sip my hot coffee instead of sculling a luke warm one. I've been reading books and snipping flowers.

This week has been full of ideas and scribbling down notes.

This week I pulled out my poor, neglected weaving.

This week the kiddos had fun trying out some new art supplies.
Paint your own tshirt anyone? 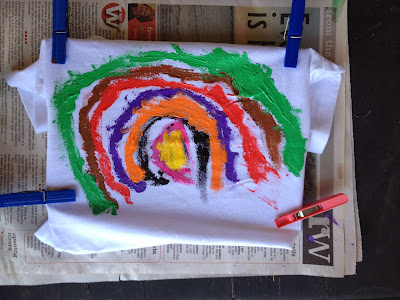 This week I went wandering and photo taking on my own...just for fun. 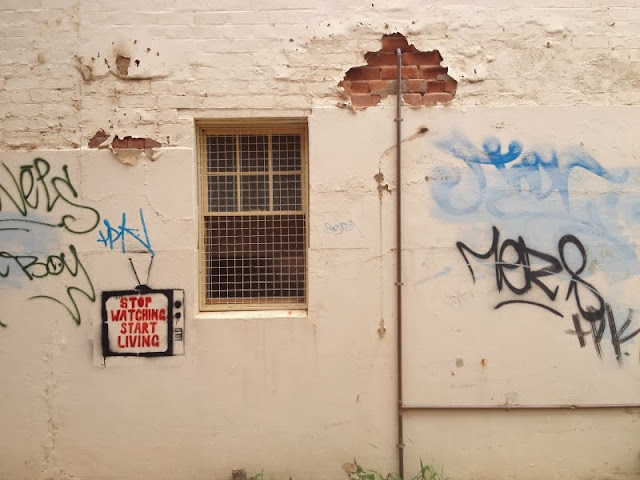 
Over Christmas there have been a few bits and bobs of treasure given and received.
First up this gorgeous bakers tray...it was gifted to me by oldest and bestest friend. She bought it a while back and has been looking after it for me in her home; I spotted it at a recent visit and well..the rest is history. 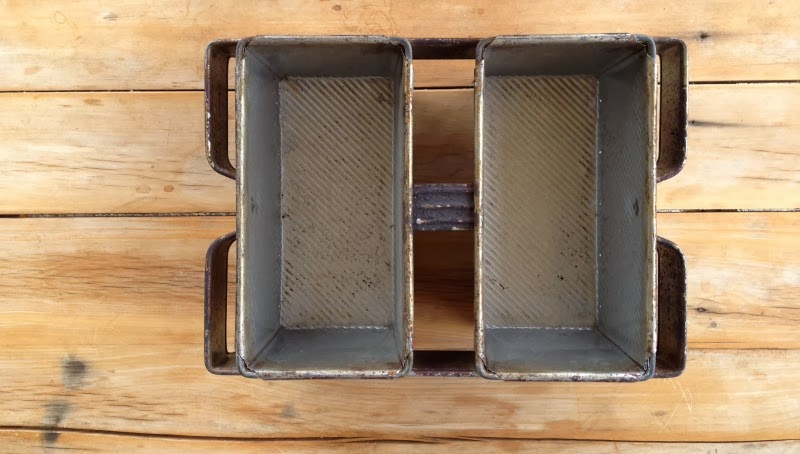 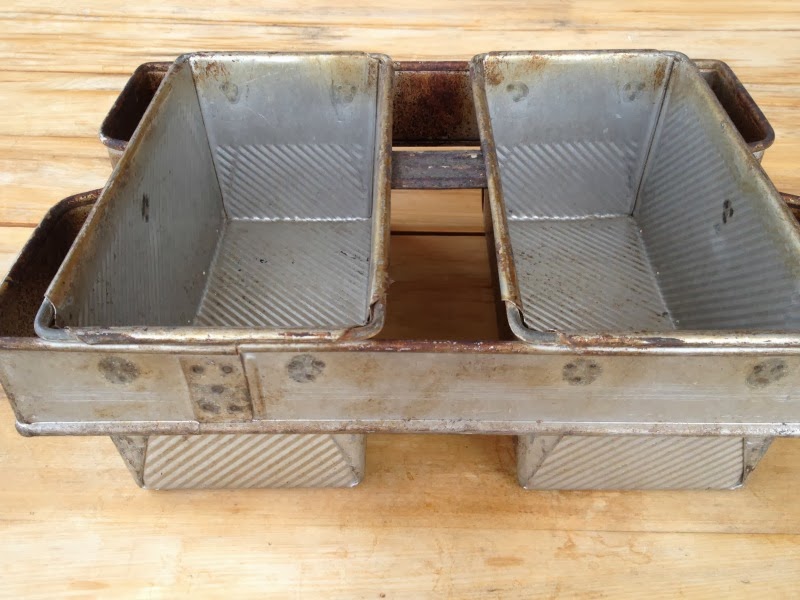 At another recent visit, I knocked over my full glass of wine and broke one of her favourite glasses. Beautiful to drink out of (apparently, I didn't even get one sip!) Worse, it was a beautiful piece of thrifted milkglass and worse still, gifted by her sister the previous Christmas! As I headed off for a night out I was googling milkglass on ebay in the cab and willing that I find a replacement piece. No such luck unfortunatey. Said friend was cool about the whole incident but of course I felt terrible.

Only 1 week later, the thrifting gods smiled upon me as I was browsing in a little country oppy. I was in the little town of Ganmain as they had some Christmas Markets on. The local oppy was also open and after a quick browse I continued on through the markets. Just before leaving the markets, I decided to pop back in for some fowlers jars and this little cup. I could not believe my eyes when I spotted this little lone milkglass goblet on the shelf. Yesss! THE very same one! What is the chance?! Hard core thrifters may not be surprised and I know you can imagine how happy it made me! I've told my story to anyone who will listen and needless to say, it's owner happily received it as part of her Chrissy pressie-the best part in my opinion. 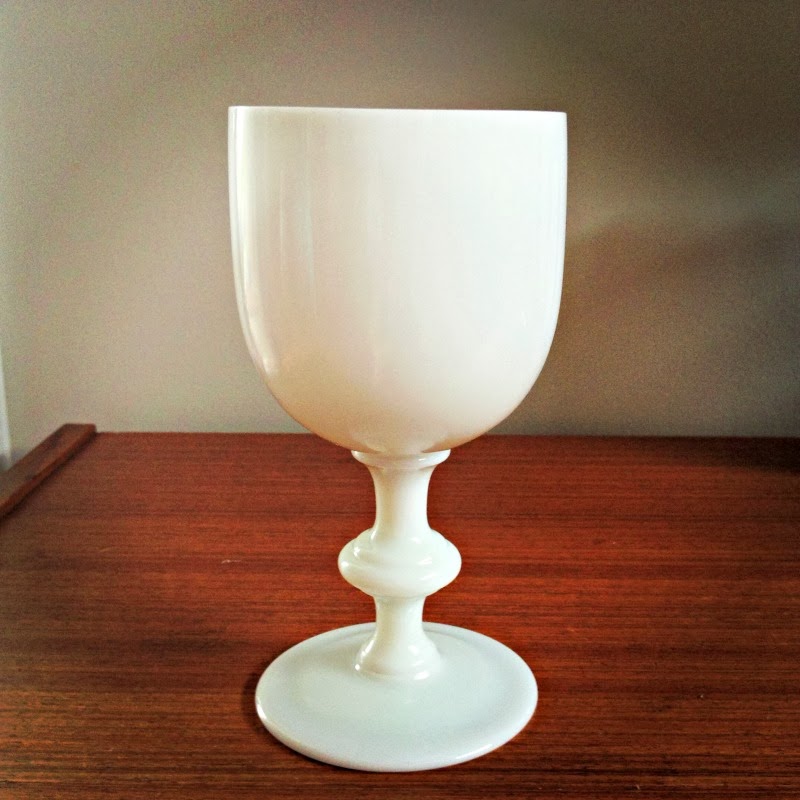 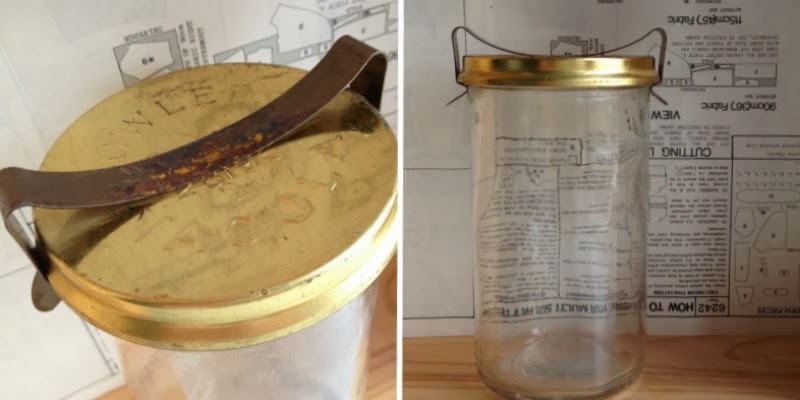 $2.00 fowler jar. Can never have enough of these especially one that's sporting a gold lid.


I'll leave you with a some snaps of our my littlest love. She was gifted this little vintage dress. It was picked up at the oppy's after Christmas sale for a buck or two. She would not let me take her picture unless I let her have the kazoo..you get the idea though. It's such a sweet little dress. I especially love the button up front and the red ties on the sleeves. 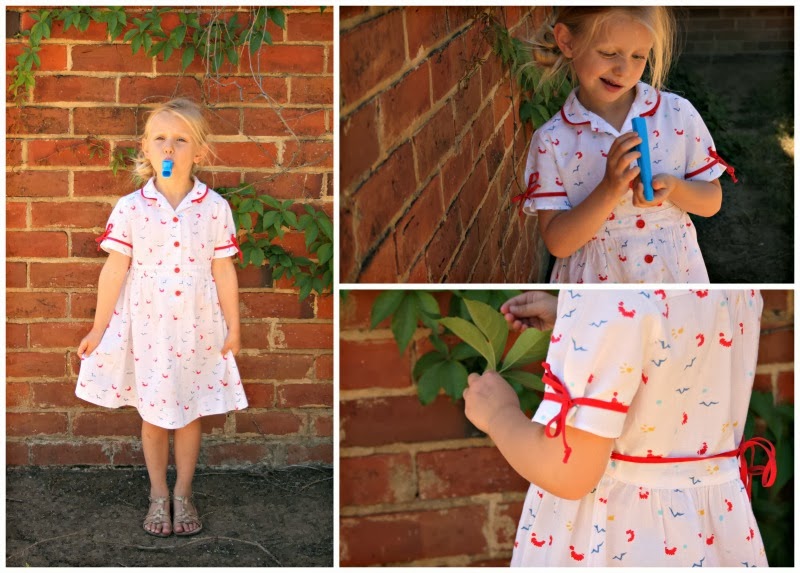 Linking in with Max and gang over here.
Posted by Lea at 5:13 PM 5 comments:

A new year, a fresh start, new intentions and one little word. 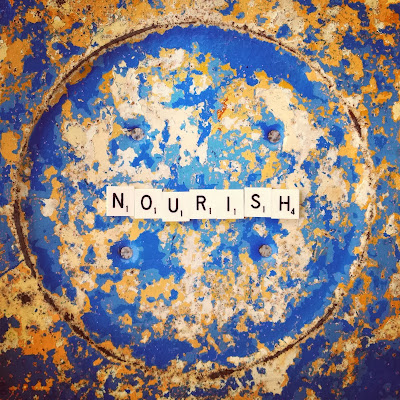 Last year I thought about this one little word a lot! I made some dolly steps and it sat quietly in the back of my mind. This year though, I am saying it out loud and I am going to live it more intentionally. I've been reflecting on what it means to nourish myself, my family, my relationships and I've been plotting and scheming and planning on making choices that nourish. It means many things to many people. To me it means to strengthen, build up. Sustain. Nurture, grow.

There have been times where I have just been treading water. I've been so consumed in taking care of others that I haven't taken care of myself. I've had a shift in my thinking over the last little while and I've discovered that by nurturing me, I am better able to nurture others. I know! I MUST have been under a rock all this time! So this year I will stop making deals with myself and putting restrictions on myself. It is time.

Have you chosen one little word as well?
I'd love you to share if you have!
Happy New Year!

wife, mama, vintage lover, sewer, maker, baker, photo taker, thrifty girl, crafty dabbler-jack of all trades master of none. This is my little spot to blab on about life, love and making stuff.